Tying the Knot: Economics and Development 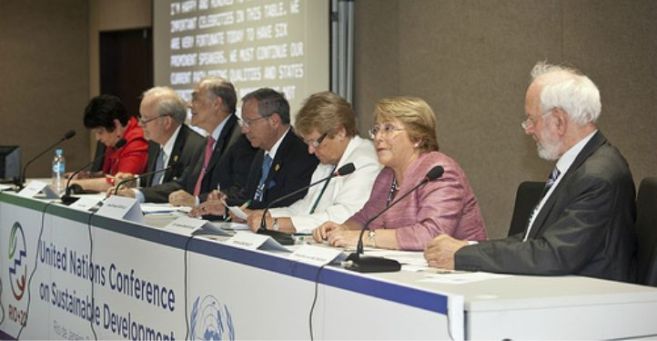 In June 1992, on the heels of a U.N. conference on Environment and Development, the first Earth Summit was held in Rio de Janeiro, Brazil. Over a 170 governments participated in the conference, addressing issues that ranged from patterns of production to health issues faced by the residents of crowded cities. The Earth Summit resulted in three documents and two legally binding agreements. Though not all of the agreements made in Rio came to fruition, at the very least it could be said that the first Rio conference aimed to do more than have world leaders exchange inflated promises. Unfortunately, one would be hard pressed to grant the same recognition to the Rio +20 conference held last month. At best, the conference offered tempered hope of future action, at worst, the summit instilled despair thanks to its lack of concrete resolutions.

The summit in Rio was well attended, with delegations from over 180 countries taking part. Thousands of reporters covered the conference and hundreds of NGOs and companies attended in order to make their point of view known. Despite the flood of people that washed over Rio during the three days of the summit, there were a few notable absences. Most notably Barack Obama, David Cameron, and Angela Merkel, the U.S. President, Prime Minister of Great Britain, and German Chancellor respectively, chose to attend the G20 summit in Mexico rather than make the trip to Rio. While scheduling both conferences at the same time may have been a poor planning decision, the choice of the world’s most powerful leaders to fly into Mexico indicates the endemic problem that faced the Rio conference. Rio +20, in large part, lacked leadership and lacked teeth. The absence of the U.S. President was particularly hard to swallow, as Ban Ki-moon, the UN Secretary general, had been pressing hard for Obama to attend. The appearance of the U.S. president would have breathed new life into the conference. Obama’s presence would have lent more significance to the summit, silencing detractors who had dismissed the conference as nothing more than an outing for bureaucrats. The lack of concrete leadership led the conference to be dominated by lawyers, lobbyists and professional bureaucrats. As such, the conference conclusion was filled with “compromises, loopholes, ambiguous or contradictory expressions, and vague promises”. While neither Obama or Cameron’s attendance would have made Rio the miracle conference to solve all development woes, their presence would have made Rio +20 a far more serious endeavor.

The fact that the world’s most prominent leaders chose the G20 conference over Rio +20 is further proof that the day’s economic concerns take priority over environmental and development issues. Considering the threat of a double-dip recession in the United States and the growing crisis in the Euro Zone, this isn’t terribly surprising. As long as economic issues are viewed as separate from issues of sustainable development, it will always be the case that G20 has more VIPs in attendance. The best way to remedy this situation is to make clear the link between issues of poverty, health, and the growth of developing countries to global economic growth. Overall, this link shouldn’t be hard to make. Diseases such as malaria and HIV/AIDS take thousands of people out of the workforce and they have been noted as main culprits behind the lagging economies on the African continent. Continuing to ignore the importance of the environment will eventually make resources too scarce for corporations to efficiently produce their goods. Moving forward, it is important to keep the example of Rio +20 in mind and actively change the way we view economic issues.
@ARCHIVEglobal