Syrian Refugees: Health and Housing Along the Migration Pipeline

ABOVE: A Zaatari refugee camp in Jordan

As an organization committed to addressing health through housing in vulnerable communities, ARCHIVE Global recently released an article presenting an alternative approach to thinking about refugee camps and improving their conditions. ARCHIVE is confident in this mindset of viewing refugee camps as homes that should be up to standards held for permanent dwellings. Currently, the Syrian conflict is the largest source of forcibly displaced people in the world. There are nearly 5.5 million Syrian refugees in the Middle-East region and thousands more in Europe.

Unsafe living conditions extend to Syrian refugee camps. Jordan’s Za’atari Camp initially housed its 80,000 refugees in leaky tents, then crowded caravans. Most shelters in Za’atari are in need of upgrades and maintenance. Nearby, refugees in Jordan’s Rukban and Hadalat camps were in makeshift dwellings unable to withstand the winter last year, without toilets or running water. These circumstances are not exclusive to camps in the Middle East. Berlin’s Tempelhof Airport Camp lacks proper infrastructure and bathrooms. The Greek government moved refugees from unofficial encampments at Idomeni to warehouses with no running water or electricity. Greece is also having difficulty accommodating refugees on five islands where camps are over capacity and most live in flimsy tents, unprepared for winter, when temperatures can drop below freezing, down to -20 degrees celsius (-4 degrees fahrenheit). In-region camps face extreme temperatures, as it can reach 50 degrees celsius (122 fahrenheit) inside a tent while 45 degrees celsius (113 fahrenheit) outside. 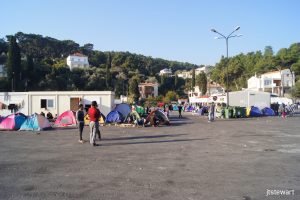 Poor housing conditions that pose risks to refugee health are not exclusive to these camps. Most Syrian refugees live outside of camps in unofficial self-settlements or previously vacant homes. Lebanon has no official camps for Syrian refugees, and 80% of Syrian refugees in Jordan live outside of camps. Along with Turkey, these host countries are supposed to integrate refugees into their communities, one of three solutions available to refugees. However, Syrian refugees have not seen adequate standards of living under these circumstances. Of the 1.5 million Syrian refugees in Lebanon, over 70% live in poverty with most of them, 60% of the total population, in extreme poverty. Conditions in Lebanon are getting worse, not better. Reports include accounts of families living in single-room homes without heat during the winter, which can threaten children’s health and exacerbate existing diseases like asthma, common in refugee children. That Lebanon has no official camps contributes to this problem. The international community’s aid structure is organized around camps, which the UNHCR considers vital to delivering aid. It is not surprising aid to Lebanon has decreased, with only 36% of allocated funding received in 2017. Refugees seeking shelter outside of camps in-region, a majority of those from Syria, are often overlooked. They are less visible than those in camps, where their needs are more accessible. 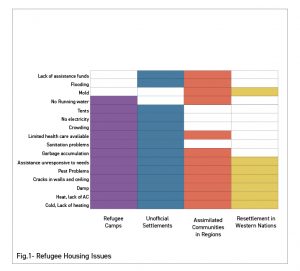 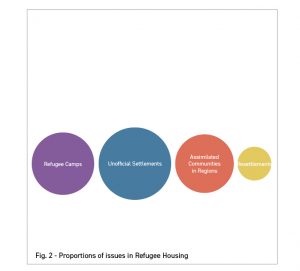 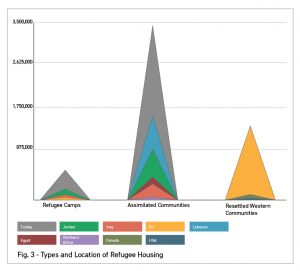 Even the refugees with the most media attention in the West, those seeking resettlement in a developed nation, may live in inadequate housing. Refugees entering the US and European countries from Syria are given accommodations while their asylum requests are pending, but their conditions can be dangerous. In the UK, homes have been reported to be damp, with mold, rats, broken furniture, and broken heating systems, exposing them to extreme cold and heat during the winter and summer. Families face leaky ceilings and pest problems. Agencies responsible for refugee care can be unresponsive to the needs of refugees.

In the world’s largest refugee crisis, Syrians fleeing their country experience unsafe living conditions along the migration pipeline. Be they residents of refugee camps in the Middle East or Europe, those integrated into host communities in-region, or even those resettled in developed nations, Syrian refugees find poor housing conditions at every turn. Much of their plight is ignored. It is easy to dismiss the risks of living in homes provided by European governments. It is easy to ignore the informal settlements and host communities that contain most refugees off the radar. It is easy to grow complacent with the resources expended on camps. These housing issues must be addressed. There are few populations more vulnerable to the health risks of substandard living conditions than refugees, and the experiences of Syrian refugees show more must be done to ensure the well-being of refugees.