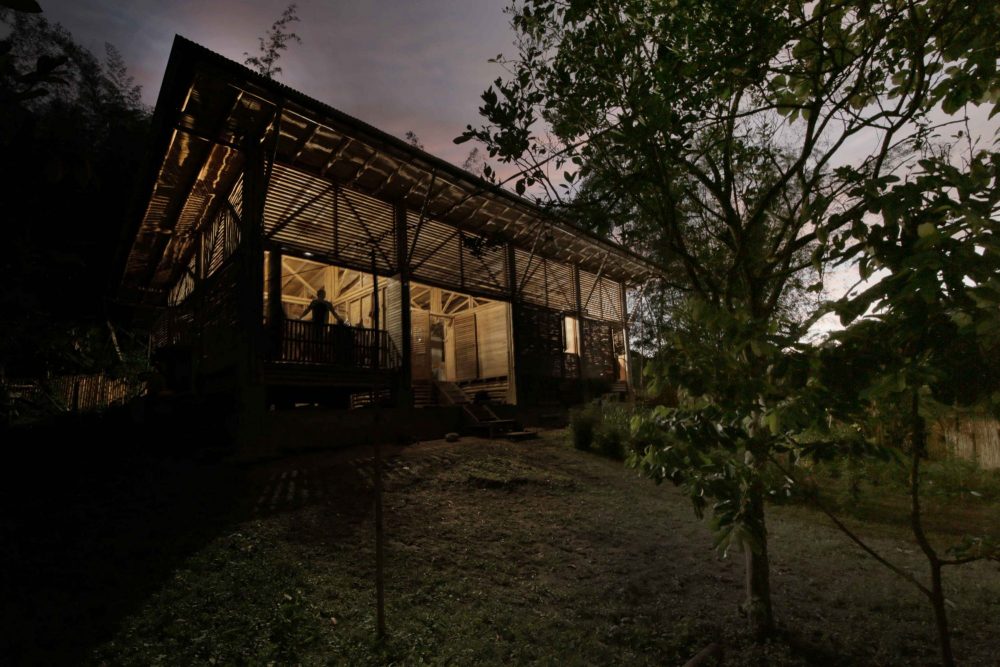 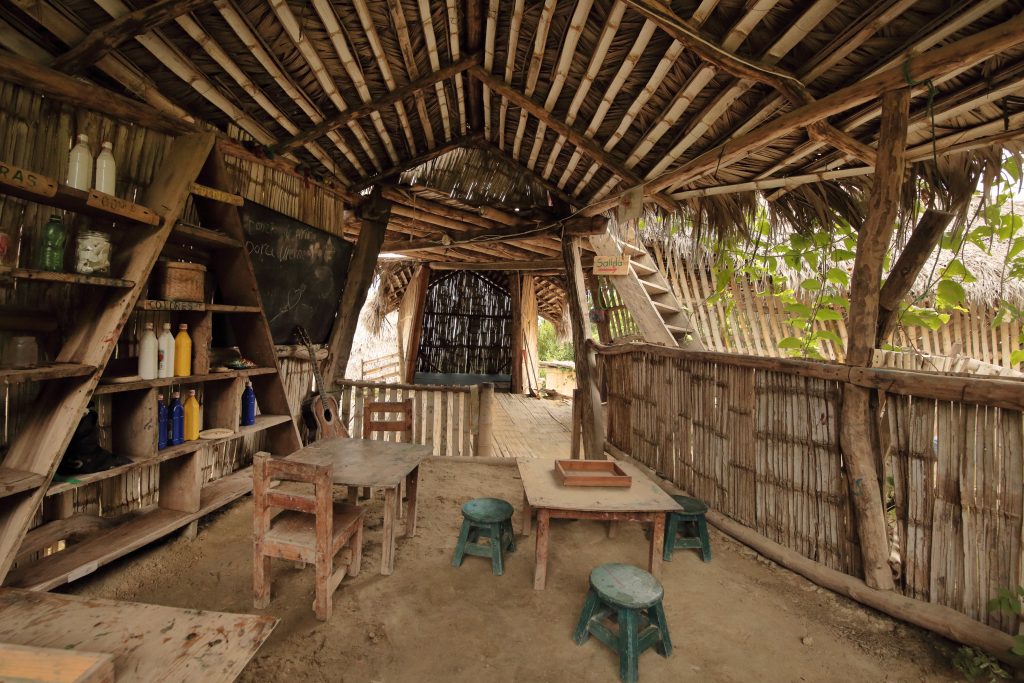 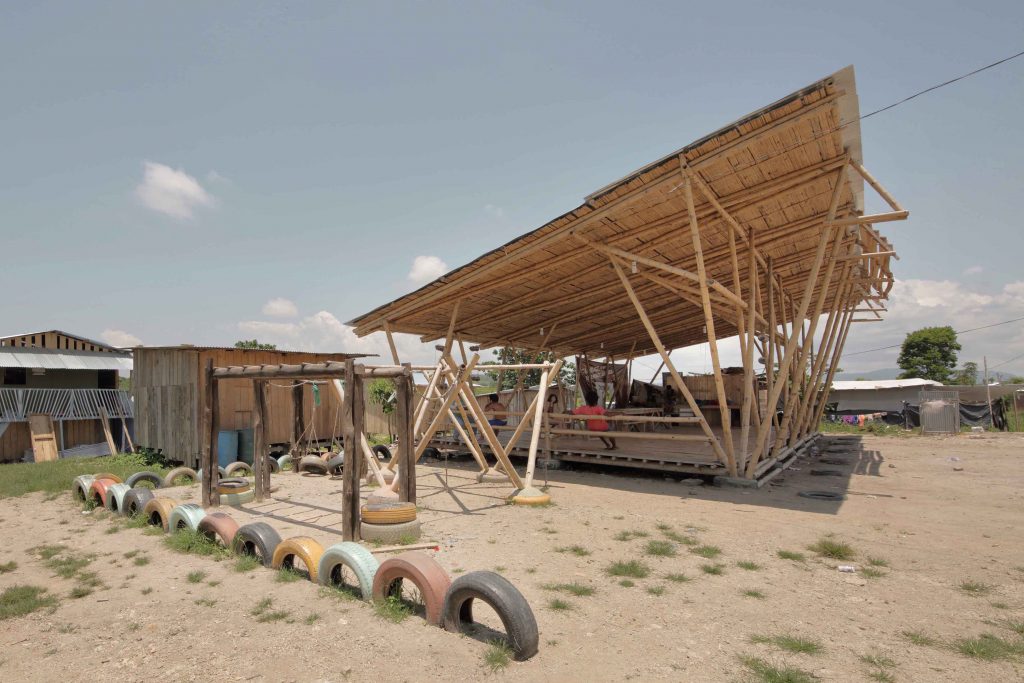 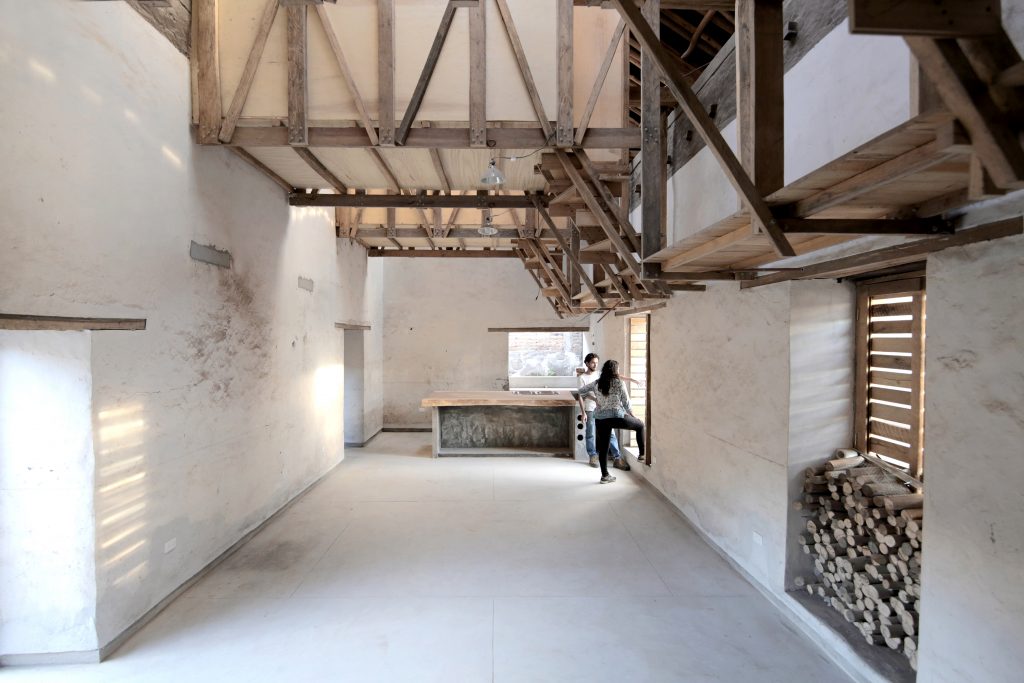 In February, ARCHIVE hosted an exclusive screening of the film Hacer Mucho Con Poco, offering an exciting and inspiring look at a new “architectural movement” coming out of Ecuador. The film focused on how the discipline can be made more accessible through creative uses of local materials and new approaches to funding. Hacer Mucho Con Poco presents a path forward for architecture focused on increasing accessibility and promoting social equity and empowerment.

ARCHIVE’s Director of Projects and Development, Sarah Ruel-Bergeron, was able to follow up with one of the film’s directors, Mario Novas, of Kliwadenko Novas, and ask him some of the questions that were discussed after the screening. Mario was reporting from Chile, 120 km south of Santiago, filming movie #2.

SRB: Can you tell us a bit about the origins of the project Hacer Mucho Con Poco?

MN: Katie and I met Al Borde in Venice and were interested in what they were doing, so we wanted to film their work. Originally the application for funding was to film the interesting methodology and work that Al Borde was doing. They started suggesting other groups that were also doing interesting work, and the catalog expanded exponentially. They weren’t interested in doing just a movie about themselves, rather they hoped to capture this interesting moment in time of architecture in Equador.

SRB: Where there any projects that you came across that did not work out- ones that you weren’t able to show for some reason?

MN: When we arrived in Chile we got in touch with Al Borde and asked for projects that had a nice “story” around them, something that made the projects special. Things like “my grandmother cooked for us on site”, etc. We came back with a number of really nice stories and projects, but the trick was to make the documentary flow and have the narrative stick together. Some stories and projects did fall outside the narrative, so they had to be cut. The storyline about how projects and offices organized and managed themselves and their projects came out as the main narrative. Then there was a large focus on materials, so that became an important narrative as well.

SRB: Can you elaborate on the Antarctic material testing project some more?

MN: Many countries have a research base in Antarctica and the Ecuadorian base burned down. There were requests for proposals and the one shown in the film was the proposed prototype. The project was filmed and prototyped in an area of Ecuador that is at an elevation of 5,000 meters, Chimborazo, so it represents Antarctica quite well.

SRB: How is the maintenance of the projects handled? How do these projects withstand time?

MN: The projects are all relatively new. The architects are young so it’s hard to have very old projects in the group. Many of the projects were built before 2016, meaning that these projects that were built of earth, bamboo, wood, etc, all resisted the 2016 earthquake. The projects mostly preserve themselves because they are all inhabited. For the community projects, the community plays an integral role in the development and regular maintenance of the projects. The jungle project (that did chocolate tours and education) is in an area where there is a large petroleum industry. Petroleum companies come and build stadiums and other community facilities that are nice, but not loved by the community, not used or inhabited. The aim of this project was to gain the buy-in of the community and that is what has made it successful long-term.

Another example is on the coastal project, the school. The women from the community get together a week before school starts and do a massive cleaning of the structure. They clean it bit by bit, they spend all week doing that, working with local tradesmen to do any repairs so that it’s in good shape for the start of the year. The structure is also built with a local logic, in the same way that the community builds with local materials. Architects arrived to show how this project could be seismically stable and applied to this context, but overall the project is not something foreign to the community. They build their houses this way, so they know how to take care of it. During the earthquake, the whole school shifted a bit but otherwise remained standing and stable.

SRB: Were there any limitations to working with historic preservation codes?

MN: Not for these projects, and not for these mostly rural contexts. We did not catalog any projects that were under historic preservation protection. The places where these projects were built were not in places like the center of Quito, which is old, historic, and has preservation rules. Part of the reason we were interested in Latin America is that there are few rules and people find workarounds to economic constraints. The projects that we looked at were about building what you want, in contexts where architectural plans and drawings are not particularly relevant. The rules are very relaxed.

SRB: How do you scale these projects? How can people make this a real viable part of the profession?

MN: It is super complicated. It is one thing to take this information to universities; that is challenging enough. Al Borde, for example, is one of the main firms featured in Hacer Mucho Con Poco. The firm teaches in a few locations globally and brought Ecuador to the Venice Biennale in 2016. They are a very well known and respected firm, but even they are not allowed to teach at many universities because the heads of the firm do not have Masters degrees. The university would lose points if they allow them to teach, so they do not allow them in. Because of this, even at the university level, it is difficult to think of this information being disseminated. That is a big barrier. These firms have hit a sweet spot in a certain time and context of Ecuador that is allowing them to get projects, allowing them to run a viable business. These firms are able to turn projects down.

There is interest in their work, but it takes a special set of variables. One of these important variables is the people within this network of projects, the people that are interested in sharing information about the projects they have developed with other firms. The people handing projects to other firms that they have been approached about developing if they don’t have the time or expertise. There is an atmosphere around this work that is not competitive, which is not common.

There is also some interest even from wealthy clients who are interested in the way they handle materials and have commissioned them to do work. They have made a name for themselves and are able to get new commissions that way. They are also defying the order of how projects are created. They will go out to a community, build a project, and then document it to have the work published. They aren’t following standard architectural practice rules. Every six months they have new interns, and they ask interns to manage a project and the budget fully, which is a fantastic experience for the interns but makes it hard to scale.

SRB: Does this business model have to be a whole way of life, or can it just be a way of practice?

MN: It’s a form of practice. I wouldn’t say that these architects are particularly “generous” people in the sense that they aren’t giving their work or their time away; they are not doing it as a charity. They make money and they can support a life where they eat out, they go on vacation. Some are more chic, others are living a more bohemian lifestyle, but overall they are doing well, financially speaking. What we have found through filming is that, for example, construction is just a way of life for the people at these firms. They are not considering themselves heroes for going out and building with the communities; it is just a part of their daily routine, of their practice as architects.

SRB: When will the next film come out?

MN: The next film in the series, which takes place in Chile, will hopefully be ready by the end of 2019. The films for Brazil and Mexico are in pre-production. Funding is difficult, so depending on what comes through, one might come before the other. For all of the projects, we seek funding through private and public sources. For the Ecuador film, the Ministry of Culture funded the project. In Chile, we have also received funds from a public source, but from Visual Arts, so the film will be less of a strict documentary, and rather more “artistic”. This is because the cinematic industry is interested in funding projects that are more like art projects rather than attempting to convey a certain amount of information on a specific topic. For the Brazil and Mexico films, we will go back to the Hacer Mucho Con Poco documentary style. You can follow Kliwadenko Novas on Facebook or Instagram to get updates on when new movies will be released.

For more information on the firms and projects in this film, check out this project map. All of these offices are extremely approachable and anyone can write to them and ask for more information. They are all friendly and answer all emails!

Special thank you to the Hacer Mucho Con Poco directors Katerina Kliwadenko and Mario Novas for allowing us to screen their beautiful film, and for taking the time to speak with us about their work.