Collecting on a Promise: Accomplishments and Setbacks 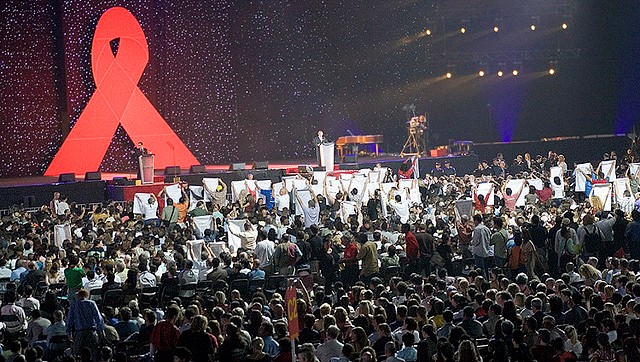 Last week, Washington D.C. welcomed over 25,000 delegates to the International AIDS Conference.  The five-day conference included, among other events, speeches, symposiums, exhibits and more.  Many of the smaller events were available to the public and were hosted in the ‘Global Village’ area of the conference center. These included live performances and art exhibitions.  These aimed to increase foot traffic and interest in the conference by engaging the wider public. Ultimately, this interaction with the surrounding community was one of the more successful moves made by the conference organizers.  Increasing awareness and interest is key to acquiring both the funds and the brainpower to make advances in the field.

In some of the more high profile events, delegates were treated to speeches and presentations by key figures such as Elton John, Hillary and Bill Clinton. The former United States President wrapped up the international event by addressing the conference’s final session.  He presented the findings of a recent Clinton Foundation study.  This study revealed that across Ethiopia, Malawi, Rwanda and Zambia the treatment of HIV-positive patients averaged just $200 per patient per year, including the cost of drugs, diagnostic tests, personnel and outpatient costs. Clinton argued persuasively therefore that, “There is no excuse for failing to provide treatment to the remaining 10 million people in need.”  Despite these shrinking costs however, healthcare workers still face immense logistical difficulties in delivering treatment to patients.  These logistical difficulties are due in large part to the fact that many HIV/AIDS patients lack secure, stable housing.  When faced with a patient who lacks a stable home, healthcare workers are hard pressed to constantly deliver drugs and health services.  When HIV/AIDS patients are able to live in stable, secure housing they can better adhere to their drug treatments and therapies, improving their quality of life.  In the midst of the studies presented and the calls for increased funding to research a cure, providing more stable environments for HIV/AIDS patients seems to have been sidelined.  New, more effective treatments will save countless lives, however, a lot of people will be passed over if healthcare workers are unable to locate and access them. To avoid wasting funds and medical innovations, housing should be included on the docket for next year’s AIDS conference in Melbourne.

Though HIV/AIDS was the focus of last week’s conference, it wasn’t the only global killer to get its fair share of attention.  Tuberculosis was also given some much needed floor time.  As it currently stands, TB is the leading cause of death among those who are infected with HIV.  Especially at risk for contracting TB are children and infants; approximately half a million children are infected with TB each year.  The high infection and mortality rates for TB are not isolated problems.  Ignoring TB has severe effects on the ability to combat HIV/AIDS infection rates as well.  If an HIV positive mother contracts TB during pregnancy the risk of her transmitting the HIV virus to her unborn child is doubled.  Considering that reducing mother to child HIV transmission rates is one of the  key steps in controlling the HIV virus, health workers will be hard pressed to accomplish that goal without putting a greater emphasis on treating tuberculosis, especially as unlike HIV/AIDS, tuberculosis is entirely curable. The focus on TB which began at the 2012 International AIDS conference will hopefully serve as a catalyst for future discussion.
The conference ended on a high, with many people hopeful about the prospect of better treatments and the discovery of a cure.  The organizers also shed light on scientific advances that have taken place over the past two years. For instance the recent discovery that HIV/AIDS treatments can have preventative as well as curative uses. Patients who are treated fully and suppressed for viral levels also have much lower rates of disease transmission.  Despite this, it would naive to call the conference a complete success.  With the focus on treatment and cure, the conference barely touched upon the contributing factors to HIV transmission.  The eradication of HIV is impossible without a greater effort towards controlling contributing diseases such as tuberculosis and ensuring that patients are able to have a continuity of treatment.  Between now and the Melbourne conference, activists and health workers should be wary of being blinded by the optimism generated by the conference.  The treatment of HIV/AIDS is multi-faceted and we should be wary of being distracted by the promise of a quick fix.